We're VERY close to official release, 1.50.11 is the release candidate, if no issues pop up it will be released to "stable" channel. Hooray!

Many thanks to all community members that helped us by reporting issues. 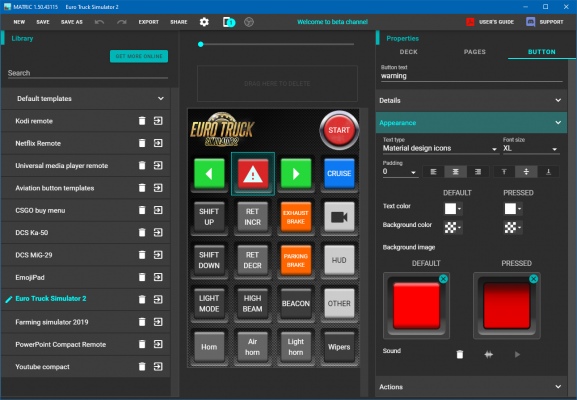 In this tutorial, we will integrate Ka-50 autopilot channel switches with MATRIC so that their state reflects the game state and vice-versa. Although this post might look really long, the procedure itself is not complicated, basically you will change one "false" to "true" and do two copy & paste actions.
Additional info is given in dashed frames.
This is a proof-of-concept and is not ment to teach best coding practices nor represent a bulletproof solution. Some shortcuts have been taken to focus on the important things.

We will edit MATRIC configuration file which is in your Documents folder (C:\Users\<your username >\Documents\.matric\config.json).

Open the file in thext editor (like notepad or even better Notepad++)
If we were making a real plugin instead of just a proof of concept demo, of course we would make a setup program which would do these steps.

MATRIC provides an API which enables 3rd party apps to control buttons on MATRIC user interface. It is disabled by default and we need to enable it.
Change the line to

1.3 Grant the permission to our DCS script

In order for MATRIC to obey our commands, we will have to do another small hack, we will add a permission in config.json like so:
This is another simplification. In general, "by the book way" would be: Basically, with the hack above we faked steps 1-3. Full integration demo can be found on Github

1.4 Get the device id we want to use in the demo

If you have already connected to MATRIC with your Android device, you will find something similar to this (if not, then connect at least once):
We will need this Id in the next step as we will use this Id to tell MATRIC we want to integrate with this particular device.
Although MATRIC integration API has a method which answers the question "Hey MATRIC, which devices are currently connected?" we will not use it, but will instead just hard-code the client device id in our DCS export script.

1.5 Save config and restart MATRIC

Save the config and restart MATRIC (right click on tray icon, choose "Quit" and the start it again)

2. The DCS side of things

DCS allows you to add code which can read the game data and do something with it. It is done by writing an export script in LUA language.
It is simple, I learned enough of it in an hour to create this proof of concept (and I'm no coding ninja).

Copy the matricka50.lua to your C:\Users\<your username >\Saved Games\DCS\Scripts", open it in notepad and modify the line You need to paste the Id from the step 1.4 between the "". In our example the Id was ivUP0l+n06oCAR6XYzZPdclCSURAVjGSyv27b42aT+o=
Save matricka50.lua

This is a script you already have, it gets executed when DCS runs it can also be found in "C:\Users\<your username >\Saved Games\DCS\Scripts". We will just need to add a single line at the end and save it:

Start DCS, open the Ka-50 deck on your smartphone and ADI channel buttons should work like in this video

More info about MATRIC Integration API and c# example can be found on github: https://github.com/tgudelj/MATRICIntegrationDemo/